Everyone who does “projects” around the house knows how essential it is to have the right tool for the right project.  Trying to drive a nail using a pipe wrench, or using a pair of pliers instead of a screwdriver to remove a screw, makes the job harder not to mention rather frustrating.

We are devoting three studies to the purpose of getting the right tools in our interpretive tool box; three studies to help us specifically with our “project” of understanding the Book of Revelation.  In the first two studies we observed three key rules and in this study we will look at three more.  The first three rules that were given were: (1) interpret Revelation literally, which means we approach this book normally as we would other scriptures; (2) interpret figurative language according to the established meanings of those figures of speech which are found in the Old Testament; and (3) interpret Revelation by keeping the truths found in Genesis 1-11 in mind. Now we want to turn our attention to our final three interpretive “tools” for understanding Revelation.

(4) Interpret Revelation by comparing it with other scriptures.  This, of course, is an interpretive rule for our approach to all of scripture.  God has not revealed all truth about any one subject in any one place.  So we need to go to other scripture in order to systematize the information revealed on any particular subject.  So when we go to Revelation 13 and read John’s discussion and description of the Beast, we are not getting all the information there is on the subject of the Antichrist. So to understand what John is saying, we need to go back to other passages that deal with this key end-times individual.  So we look at what Daniel reveals, what Paul records, what Jesus said, along with other writers of scripture.  Then, and only then, do we get a systematized view of what the Bible says about this individual.  By doing this, we avoid making interpretive errors in our study of Revelation 13 as well as coming to a clearer understanding of the Beast.

(5) Approach Revelation chronologically.  The Book of Revelation is not a random, haphazard setting forth of information about the future.  The Book of Revelation is fundamentally given in chronological sequence.  This is first seen in chapter 1:19, which almost all interprets agree is the “divine outline” of the book.  John is commanded by the Lord Jesus to write down the information being given to him: the past vision (1), the present situation of the seven churches (2-3) and then things future to John’s day (4-22).

This outline sets the framework for understanding the entire book.  A key phrase in 1:19 is “after these things.” After the things of the church, then will come the events described in chapters 4-22.  Revelation 4:1 then uses this same phrase twice with a slight difference in usage but both usages speaking of chronological sequence.  The passage reads:

“After these things I looked, and behold a door standing open in heaven and the first voice which I had heard, like the sound of a trumpet speaking with me, said, ‘Come up here, and I will show you what must take place after these things.’”

The first “after these things” lets us know that John received this vision after he receive the information of chapters 1-3.  The second use of “after these things” tells us that the events of chapters 4-22 will follow the events of the church age (chapters 2-3).  So the “divine outline” coupled with Revelation 4:1 sets the framework for approaching the Book of Revelation.

But there are other chronological indicators in the book.  After the events of the church age, John is given information about what will then come.  In chapters 4 and 5 he is taken to heaven where he observes the transferring of ruling authority from the Father on the throne to the Son (the Lion-Lamb of Judah). This is immediately followed by the Lord Jesus opening the first seal which initiates the judgments of the Tribulation.  These judgments are designed to bring Israel back to the Lord and to punish unbelieving men and nations. Chapter 6:1 – 8:1 records the first series of judgments, known as the “seal judgments”. In the middle of this first series of judgments (chapter 7) we are given additional, vital information. This is to let us know that God is interested in saving men, not just judging them.

Following the “Seal judgments” come the next series of judgments, known as the “Trumpet judgments” in chapters 8 and 9.  This series is actually the seventh and final “seal” judgment.  Coming from the seventh seal makes it clear that there is a chronological “flow” of judgments.  At this point, there can be some confusion.  Revelation 9 ends giving the details of the sixth “trumpet”.  But the seventh trumpet is not mentioned until 11:15, but the contents of that judgment is not given.  The seventh “trumpet” announces the final series of judgments, the “Bowl judgments” which are not recorded until Revelation 15 and 16. It is at this point that some confusion arises until we look closely at Revelation 10:11 and the words “prophesy again.”  There is stop in the flow of events while John is given a scroll which adds additional information about the Tribulation.  There are four things that John needs to know and reveal, found in chapters 11-14.  These, I believe, all refer to the second half of the Tribulation period: namely, the Two Witnesses (12); Israel in the Tribulation (12), the Antichrist (13) and finally Armageddon and the last weeks of the Tribulation ending in Christ’s Second Coming (14). 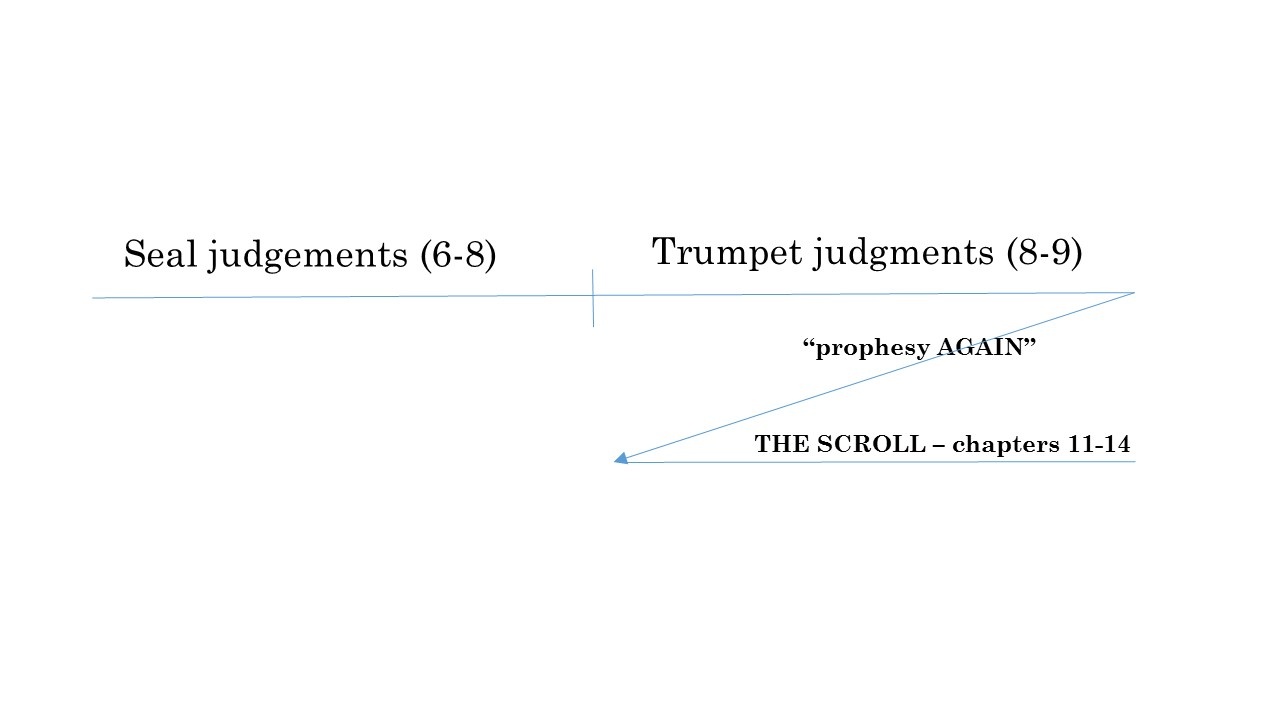 After John gives the content of “the scroll”, he records the final “Bowl judgments” (chs. 15-16).  This is followed by another parenthetic discussion of Babylon (chs. 17-18).  John had twice mentioned Babylon (14:8; 16:19) but had not given any details about this entity which is obviously quite important to the end times.  The Book concludes with John’s final vision (chs. 19-22) which has the chronological marker throughout the vision.  This marker is the phrase “and I saw” which shows again the sequence of the final events in this book.

When we are aware of these key chronological indicators within the book itself, the Revelation becomes all the clearer.

Hopefully, these interpretive tools will give confidence and direction as we come to this fascinating but complex book.  Remember, that God’s desire is that we understand what He has revealed about coming events.  Revelation is an “unveiling” of Jesus Christ and His future work.